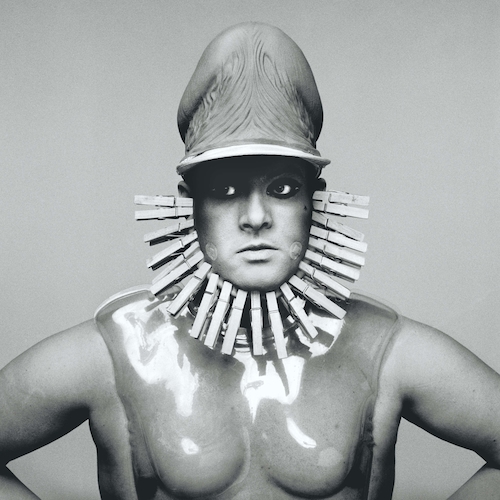 Not ones for subtlety, the live performances of the track added further blood and gore schlock horror to what was already a controversial song. Richard Torry says: “Leigh and I wanted to write an anthem for the Lesbians at Fist (a hardcore fetish club of the early 90s) - they were at the extreme edge of boundary breaking between sex and gender.” Matthew Glamorre adds “We also needed a soundtrack to the ‘birth’ performance that opened the show so the song became a challenge to the feminist narrative that men were useless as they couldn’t create life.”
Bowery cut a huge figure in floral dress, face mask and wig heaved his way onstage and belted out the lyrics over a throbbing live rock band. He stomped and boomed across the stage never missing a beat. At the crescendo he hauled himself onto a table, laid back and ‘gave birth’ to Nicola. A full-grown woman emerged who had been harnessed beneath his dress for the duration of that explosive performance. It was filth, blood, gore and the artistic manipulation of flesh for which Bowery was renowned. Boy George, who had seen it many times, said that it “never ceased to impress or revolt”; And so the track and performance
entered into the world of cultural legend.

Over the last 25 years ‘Useless Man’ became part of the soundtrack to the underground music and art scene. The Grid mix continues to be played on indie/ alt/ queer dancefloors throughout the world.